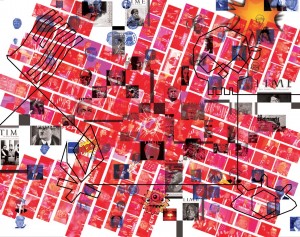 William Gibson
Was it Laurie Anderson who said that VR would never look real until they learned how to put some dirt in it?

When on Twitter Trump quotes Mussolini via @ilduce2016  “It is better to live one day as a lion than 100 years as a sheep.” he is merely feeding a delirious ongoing rant intending to hold the  very image that he knows will populate the nation’s psyche for 100 years. If the image is meant to be seen a that of a lion, it really is a monstrous one, so different from others since it can only be seen as a mad proclamation whenever one is encountered. It may pause as a lion but it really is a creature  suddenly surfaced from an underworld that we have allowed to thrive with its pathologies and dysfunctions. We have witnessed and even consumed it as a  spectacle in and beyond reality TV.

Benito Mussolini
The hard part is to keep people always at the window because of the spectacle you put on for them.

Under our passive watch, media, design and image have merged into autonomous systems whose replication is maintained simply through the passive consumption by viewers and users. Whether commercial, poetic, journalistic, passive, active, hot, cold, streamed, broadcast, shared, printed or projected, the iconography in media is turned into our defacto socio-cultural landscape. It is literally an image of ourselves that is at once imposed and self inflicted—an image that works best if it can be simultaneously loved, hated and above all craved.

Adolf Hitler
All propaganda has to be popular and has to accommodate itself to the comprehension of the least intelligent of those whom it seeks to reach.

Propaganda works in two ways, first when it becomes pervasive and second when it is assimilated, trusted and acted upon. But what happens when it becomes pure spectacle and loses its relevancy with reality it still has the power and potential to produce a new reality. Infamy overrules merit.

Archduke Sperginand
Donald Trump is an artist among autists. When Trump speaks, everyone loses themselves in the experience of the sublime.

Good art is always a new reality and the image of Donald Trump is art, even if unintentionally. Trump should be seen not a con-artist but as an artist.