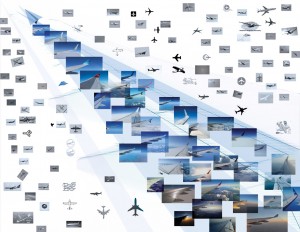 Airplanes have lost their mystique and been reduced to mass transportation, they throw each traveler through the grinding gears of security gates, hence pushing us through the dramaturgy of unrealistic tragedies in which we would be either on a suicide mission or aiming for martyrdom. And yet the airplane, whether as bomber or passenger jet, remains a flying thing with it own intelligence, hence joining other mythical creatures such as angels and super heroes. Furthermore, airplanes are airborne urbanities and extraordinary expressions of modernity, flying non-stop into future space and time zones.

Ted Rempel
Inventions are extensions of the human being.

… extensions through space and physical extensions. Wings are powerful totemic images, and when they crash may be a reminder of this gift of flight that humans stumble upon or were handed down by the gods. When we fly we are sitting next to the Greek Icarus, the Hindu Jatayu, the Chinese Kua Fu, king Bladud and the Babylonian Etana—not counting Prometheus on his way down with the gift of fire for humankind.
/ Ironically, an “Icarus” search in Google mostly returns photos of passenger jets. We photograph airplane wings because that is the only thing we can photograph from the constrains of seat-belted seats or it is our way to exorcize the untold anxiety of being somewhere between celestial and explosive states—only separated by wings.

The modern image wants to be light and  free. It wants to be pervasive and nomadic, it travels through world cultures even more effectively than words, hence is the language of globalization. Images invade the global mental space because they travel regardless of meaning. They don’t ask or tell. They just show. Images are lighter than air. They are inherently ethereal.