SENSEFACTORY is a large-scale performative installation combining architecture, sound, smell, light and AI technology into a immersive multi-sensorial experience. It is inspired by László Moholy-Nagy’s 1924 “Mechanized Eccentric” concept — a new kind of theater for the senses, that would merge machine and organism. With SENSEFACTORY it is interpreted through a colossal, breathing pneumatic environment. The installation is structured in three parts. The first one, ENTRY includes a large projection that explores the broad notion of “body.” The video combines imagery of human anatomy with diagrams from the Moholy-Nagy score. »More 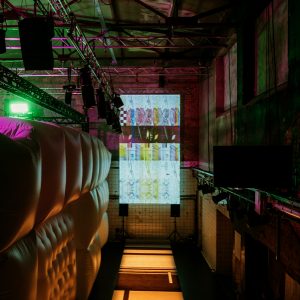 Simage Ladder in Petaluma Arts Center‘s Power of Ten: Scaling Up exhibit curated by Llisa Demetrios. It is conceived in the form of a 3.5m scroll that runs the full height of the wall. Simage Ladder stands as a life cycle made up of ten typologies running from babies to clouds. If image indicates where we come from, it is also a metaphysical search into possible futures. »More 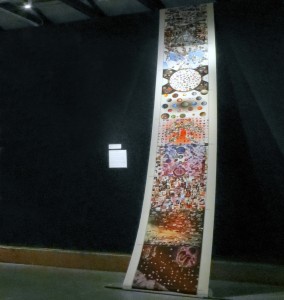 Clocks / A clock image can be seen as an oxymoron, unless we conceive that a broken clock is still a “clock.” However, many images of clocks set on a planetary frame are marking all hours at once, hence together they could be seen as a meta clock. If time is multi-dimensional (and relative), the image of time is always absolute and singular. It is always 02:33:54 somewhere in the world—a point in time and space. »More

Dimensions Series – Expanding Dimensions, CCA, Oakland / The series aims to reveal a world of representations, or “representational world”, which is at once iconographic surface and interface. Its components are dynamically interwoven into a dimension where the distinction between the point, the form, the volume, the temporality, the usability and the meaning are becoming blurry, fleeting and even conflicting. These 60X51cm prints together explore all possible dimensions. [curated by Mara Holt Skov]

SimagePorticus – American Academy in Rome’s Trustees Week exhibition / is a site-specific installation conceived to stage the idea of ‘simage‘, combined here with the mixed topologies of Roman Arches and portraits—hundreds of images projected over the bricks of Cryptoporticus in a 520sec loop. The sound by composer Jesse Jones,  includes image-related quotes. (interim concept shown here) This piece comments on today’s technologically “augmented” relationship with the physical world turns all things into spontaneous images and by doing so shatters the world of “image” into a “sprawling metabolic image.”

ScalaCupola – Cinque Moster 2013 /  is a site-specific installation exploring the dynamics between image and architecture (Sistine Chapel ceiling and a staircase at AAR): their meanings, temporalities, motions and placements. (w/Jesse Jones, composer) 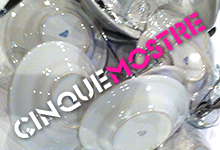 DinnerConversation – Cinque Moster 2013 / explores the combined use of images and words when one wishes to quickly convey a topic. With the emergence of the new image phenomenon, our sensory engagement with life is being channeled in new digital ways, which include ubiquitous conversations in social media spheres. Can we still experience the world as purely physical sensorium? Dinner Conversation explores modes of expressions that are inherently visceral, physical and sensual. (w/Ross Altheimer) 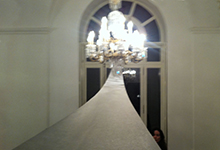 Facsimile – Nuova Consonanza 2012 / is an installation specifically for the main rooms of Villa Aurelia to express the notion of noise-silence in image. It is here framed by the interior space of a building on the theme of John Cage.

The Cave / a video sketch