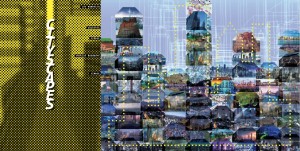 Lev Manovich : The flâneur navigates through the flows of passers-by and the city streets, enjoying the density of stimuli and information provided by the modern metropolis. He can intensify his experience of ‘being in the flow’ by choosing particular places and times of days.

Augustus : I found Rome a city of bricks and left it a city of marble.

SIMAGE : Cities are no longer made of bricks or marble, they are made of images, are image, and they reproduce like images of each other, as if being printed of concrete, steel, and glass.

Douglas Rushkoff : Walkman was the precursor to the cell phone, in terms of your strategy for getting through the urban landscape and the modern experience. Insulate yourself from it with your own soundscape.

As manifestation of civilization, the city is the ultimate image, and the ultimate city may soon be virtual, mixing distributed locations with physical ones. Cities will then meet each other, as we humans have met each other within city walls for the past
seven millennia.