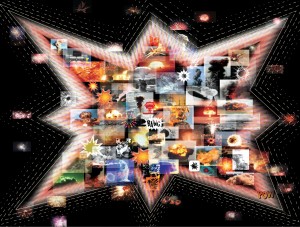 Mark petrakis:   In movies there are explosions after explosions. They stun you into submission. There is no escape from adrenaline.

And the end is often a series of Explosions as if the movie was exploding itself as a grand finale.

In the narrative of modernity, they are spectacular expressions of progress. They are the symbolic combustion engine that in the 20th century introduced mankind to our post human condition. These explosions have produced more than destroyed but one could argue that the outcome is a radical eradication of all that man had conceived so far. Suddenly our recent past has more impact on our shrinking present than all of human history.

Mao Zedong:   The atom bomb is a paper tiger which the United States reactionaries use to scare people. It looks terrible, but in fact it isn’t.

An explosion is a transformative moment. It is far more believable on TV than on paper.

Alvin Toffler:   The next major explosion is going to be when genetics and computers come together. I’m talking about an organic computer—about biological substances that can function like a semiconductor.

The information age is being followed by the explosion age. We are living through a long and slow explosion—just too slow to be seen with the naked eye. History will play it at the right speed.

Jurgen Habermas:   Perhaps September 11 could be called the first historic world event in the strictest sense: the impact, the explosion, the slow collapse—a gruesome reality literally took place in front of a global public.

In Apocalypse Now Kilgore proclaims “I love the smell of napalm in the morning.” and then “The smell, you know that gasoline smell, the whole hill. Smelled like… victory.” Francis Coppola is here enhancing the spectacle of explosions with what the one sense the viewer cannot access.