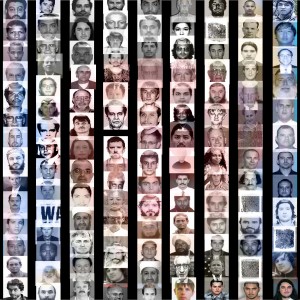 Nicholas: No. You listen to me. You go near my family, and I will cut out your goddamn guts like I did your fucking friend. Do you hear me?

Billy: He wasn’t my friend. He was my brother. And now I’m coming for the rest of your family. You just bought them a death sentence, motherfucker.  —Death Sentence (2007)

William Faulkner: The past is never dead. It’s not even past.

Eddie Cantor: When I see the Ten Most Wanted Lists… I always have this thought: If we’d made them feel wanted earlier, they wouldn’t be wanted now.

M. Petrakis: Justice like the economy is bloody and blind, and spilling cash – which is scooped up in big plastic tubs by thousands of greedy supreme court jesters.

Edward Snowden: Bathtub falls and police officers kill more Americans than terrorism, yet we’ve been asked to sacrifice our most sacred rights for fear of falling victim to it.

Cullen Murphy: Torture as a tool of jurisprudence was little known in the darkest part of the Dark Ages. The ability of human beings to discover the truth was thought to be limited. Thus the reliance not on judges or juries but on iudicium Dei—the judgment of an all-knowing God—to determine guilt or innocence. This often took the form of trial by ordeal. The accused would be submerged in water, or made to walk on red-hot coals, or forced to plunge an arm into boiling water. If he or she suffered no harm, or if the wounds healed sufficiently within a certain period of time, then it was the judgment of God that the accused was innocent.

Mark Petrakis: This death sentence was only 140 characters long – and you have to take it sitting down.For every person, there is a chair that symbolizes them in the thrift store of the afterlife. Don’t take it personal. We all end up in the same place.

Victor Hugo: Alas! alas! small things come at the end of great things; a tooth triumphs over a mass. The Nile rat kills the crocodile, the swordfish kills the whale, the book will kill the edifice.