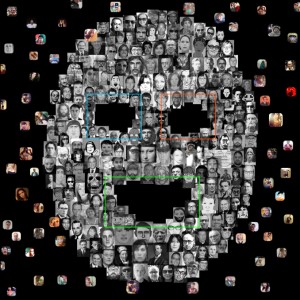 SIMAGE: Profiling, cataloging, tagging, casting, filtering, targeting, aggregating, discarding… And it is not just images that are being treated as crowds… Everything and everyone has to fit in database in order to fit in with others.

More and more of us is being projected outward through mechanization. Does it imply a loss of the aura? An augmentation of the self?

PORTRAITS are people turned into image. We have a sense of where a person begins and ends, in physicality, life span and social standing, but a portrait begins and ends in the same place. Where does the truth begin and end? The question of authenticity begins at the moment of creation, but that of veracity is challenged immediately upon completion, if only because images and people do not live through time equally.

Marcel Proust: Time, which changes people, does not alter the image we have retained of them.

Vanina Pinter: Beyond the photo-grapher, it is the photographed who controls the viewer.

Jonathon Keats: Unlike Monroe, whose messy life was extensively chronicled, Lisa del Giocondo was known only by her appearance. A single image was the entire basis of her fame.

SIMAGE: Images perform, and few do it more than selfies. Even if they are no more than  self aggrandizing bytes, they are the overlap between creator and created. The vertiginous idea that each one of us is the center of the universe as well as its creator, consumer and user. Ultimately, as part of mechanization of the identity capture, selfies participate to the tracking apparatus already in place for us all.

Mark Petrakis: Facial recognition is discovering the pattern of familiarity inside the edifice of anonymity.