1968 POWERS OF 2001 marks the 50th anniversary of Powers Of Ten (Rough Sketch) and 2001: a space odyssey. As such it relates the optimism of ‘68 with a present of touch screens, artificial intelligence and space colonization. It is a momentous instant, a sequence of memory fragments, the expression of a future that can never be more than a image. Ultimately it is a journey of eight minutes in time.

1968 was a year of huge transitions, triumphs, tragedies and breakthroughs in all fields. It gave us two historic movies that reflect the spirit of that year. In different ways, each one has contributed to the writing and making of the century. They are vastly different in form and substance while belonging to the same cultural momentum. They share the same ideals of modernity and yet aim toward their own unique expressions of human knowledge and achievement. They helped us to see the world beyond its horizon, in search for the understanding of who we are, from apes and lazy picnickers to molecules and immortal beings. As such it brings the seemingly innocent optimism of ‘68 into a present of touch screens, artificial intelligence and space colonization. Depending on viewers, this project may appear as a momentum of the instant with its fleeting commentaries, or as a sequence of memory fragments, or for other viewers as a still emerging future.

Powers Of Ten, a timeless leap of cinematic science by Charles and Ray Eames, started with the 1968 short film A Rough Sketch for a Proposed Film Dealing with the Powers of Ten and the Relative Size of things in the Universe. The film is based on the 1957 science book, Cosmic View, by Kees Boeke and has been popular with all audiences. It reveals the universe through the objective lenses of telescopes and microscopes, merely speculating on the matter that could not be optically captured. We travel through space and time. Every second is a giant step into knowledge and a discovery of the universe in its macro and micro dimensions. This film is only 8:33 mn but it feels like an inifinite exploration of the cosmic reality we inhabit—a journey into the soul of life, if not reality itself.

2001: a space odyssey by Stanley Kubrick and based on the Arthur C. Clarke novel, was a leap of cinematic art and technological predictions. It takes us in a 142 mn journey whose destination is the very mystery of creation. In the context of the sixties, it was a dazzling display of visual effects, and as such also a trip between overstimulated retinas and perhaps confused brains. It was an invitation to travel into the movie screen and a challenge to imagine possible interpretations for our symbolic contact with the Monolith. With each encounter with this supermodern object, the contact becomes less and less physical. In the last instance—in the movie theater, the screen is the Monolyth. 2001: a space odyssey was a window onto a future where everyone owns a pocket-size monolith and their own HAL 9000..

CREDITS
Powers Of Ten: A Rough Sketch (1968): Directed by Charles and Ray Eames / Based on the book Cosmic View (1957) by Kees Boeke / Narrated by Judith Bronowski / Music by Elmer Bernstein / Distributed by IBM / 8 minutes Running time

RELATED PROJECTS:
ScalaCupola a site-specific installation at the American Academy in Rome 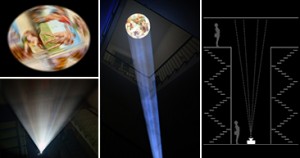 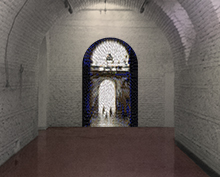