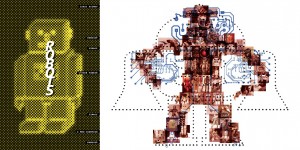 2. A robot must obey the orders given it by human beings, except where such orders would conflict with the First Law.

3. A robot must protect its own existence as long as such protection does not conflict with the First or Second Law.

SIMAGE : Humans and machines cohabitate and compete because they are becoming more alike than different. The robot population is growing, as virtual pets, maids, caretakers, factory workers, soldiers, and increasingly as extensions of ourselves.

Steven Pinker : We no longer worry about electronic serial killers or subversive silicon cabals because we are beginning to appreciate that malevolence does not come free with computation but has to be programmed in. The computer running WordPerfect on your desk will continue to fill paragraphs for as long as it does anything at all. Its software will not insidiously mutate into depravity like the picture of Dorian Gray.

SIMAGE : A parallel can be found in the world of images where automation has produced countless millions of bots that often work with images or even control, enhance or destroy them.

A MMO-Champion : I see more and more bots… There are more bots than humans… I will quit now thanks to bots ;(

Aaron betsky : We may have to re-imagine ourselves as cyborgs and delve into the architecture of that new kind of self.

RoboCop : Dead or alive, you’re coming with me!

One thought on “ROBOTS”