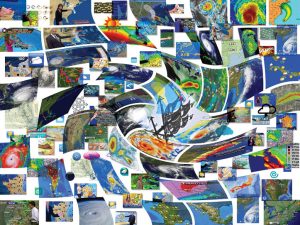 Bruno Latour:  …there is a disconnect between the science and the size of the threat that people mention about nature, the planet and the climate, and the emotion that this triggers. So we are supposed to be extremely frightened people, but despite that we appear to sleep pretty well.

••. Weather reports are one of the most popular low hanging fruits of TV.  We love to know the making  of tomorrow as much as we love the forecasting of it. That is a reassuring prediction that tomorrow will happen.

Mark petrakis:  The weather returns us to the gods of antiquity, back to when weather and gods had life and death powers over humans.

••. Every day we have diagrams of the daily weather report as well as images
of unfolding climate change. We see and here the forecasts overlaid on maps and later in the day the week we see in the news whether sun bathers or flood scenes followed by dramatic clips of polar bears on shrinking icebergs. The former are implicitly dated dated to the hour while the later are vaguely localized and explained. One is an image of the day and the other one of century. The value of both is anchored in the maps we can attached them to, which then further layers the maps when we see them.
/ Why have learned to easily live with and  believe in weather reports while  avoiding and denying the more seemingly subjective images of atmospheres and climates.

Gary Wolf:  During a large disaster, like Hurricane Katrina, warnings get hopelessly jumbled. The truth is that, for warnings to work, it’s not enough for them to be delivered. They must also overcome that human tendency to pause; they must trigger  a series of effective actions, mobilizing the informal networks that we depend on in a crisis.

••. Sometimes images are more than simple representations, they function as light-bulbs or fires that illuminate and reveal the world we live in. In that sense an image may be the light-bulb that we should avoid staring at in fear of being blinded, or should stay away from, to avoid being burned.
/ Just like books, images are not empowered with meaning until they are seen and understood. There is an inherent separation between image and viewer that is to be overcome by informed viewers, or by powerful images. In that sense, images remain in the dark unless they are seen in light or can be seen
as light—or flame.